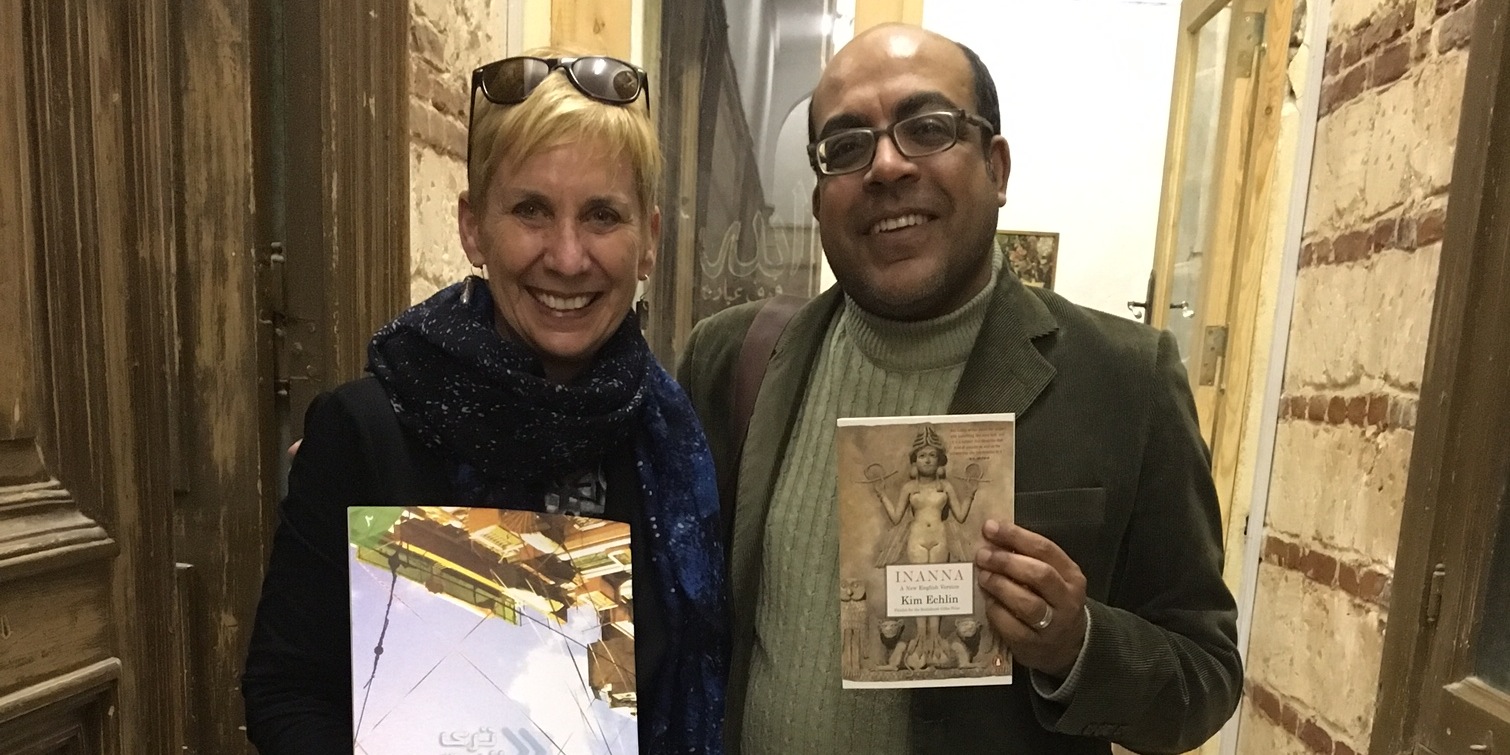 PEN Canada member Kim Echlin was in Egypt in February 2017 for the Cairo Literature Festival. There she met Abdelrahim Youssef, artistic coordinator of the Gudran Association for Art and Development (pictured above). Read more about Gudran below, and a full report on the festival here.

Culture (and resistance) in Egypt: The Gudran Association for Art and Development

The Gudran Association for Art and Development is located in Alexandria, Egypt under the leadership of its cultivated and energetic artistic coordinator, Abdelrahim Youssef. I visited earlier this year while attending the Cairo Literature Festival.

The Gudran Association is a vibrant centre of writing, reading and cultural exchange. It also creates space for film and visual arts.

Abdelrahim Youssef, teacher, writer and translator, joined Gudran as a volunteer in 2004, and now actively coordinates with the wider writing community in Egypt, encouraging younger creators.

Most recently he has been working as a translator to facilitate the work of Syrian poet and activist Rasha Omran. Because of Abdelrahim’s generous translation, the world has more access to one of Syria’s most important contemporary writers. Her daughter, now living in France, in a letter to her mother coined the phrase, “The international silence on Syria is deafening.”

The quiet dedication and collaboration of these artists, all connected through organizations such as Gudran, helps all of us witness to work that bridges and connects us, that creates our deeper mutual understandings around the world—linguistic, literary, political.

Gudran was founded in 2000, west of Alexandria in the fishing village of El Max on the El Khandak canal. It was registered as an NGO in 2003. Gudran means walls and was used to name the centre in honour of artists’ paintings of their centre, Beit (House of) El Max and the walls of village houses along the canal. It has been attacked by Salafi groups who feared the centre’s activities and “imperialist” funding from the West. This funding is under ongoing threat.

Gudran has continued to grow, despite these challenges, providing essential space for access to the arts in Egypt. After two previous moves, the centre moved in 2014 to its current location, Wekalet Behna, formerly the biggest film production house in Egypt. The building required a full year to restore using a team of 30 volunteers under the supervision of the visual artist Aliaa El Gready, the co-founder of Gudran, with visual artist Sameh El Halawany and a number of friends.

This is a labour of love, and resistance.

Gudran has succeeded against many odds in creating a space for literature and culture in Alexandria.

The artistic activities of Gudran are free and open to all, significant in a place with many barriers. This grass roots organization encourages both male and female youth interested in writing and culture. The young people I met at the centre were energized and motivated by their access this space. Funding is always a challenge and in our last exchange, the organization wrote to me: “Right now we face some funding problems due to getting governmental approval on funds from the Ford Foundation. This threatens our work but we are still endeavoring to find a solution and we are still having a plan of work till June at least.” It is important that writers around the world continue to witness to the work of Gudran in Egypt.

The Egyptian government has continued to freeze NGO funding on literary, cultural and feminist initiatives. Feminist activists Mozn Hassan and Azza Soliman continue to suffer the imposition of travel bans and the freezing of their organizations’ funding from international NGOs. Mohamed Ramadan, lawyer, was sentenced to ten years in prison last month for a Facebook post. In May 2017, more cultural funding freezes were announced by the government.

To read more about the Gudran Association for Art and Development, visit their website.

Kim Echlin is the author of The Disappeared and Under the Visible Life, both recently translated into Arabic. She is currently collaborating with Abdelrahim Youseff and Rasha Omran on a selection of Omran’s poetry and an interview in English.