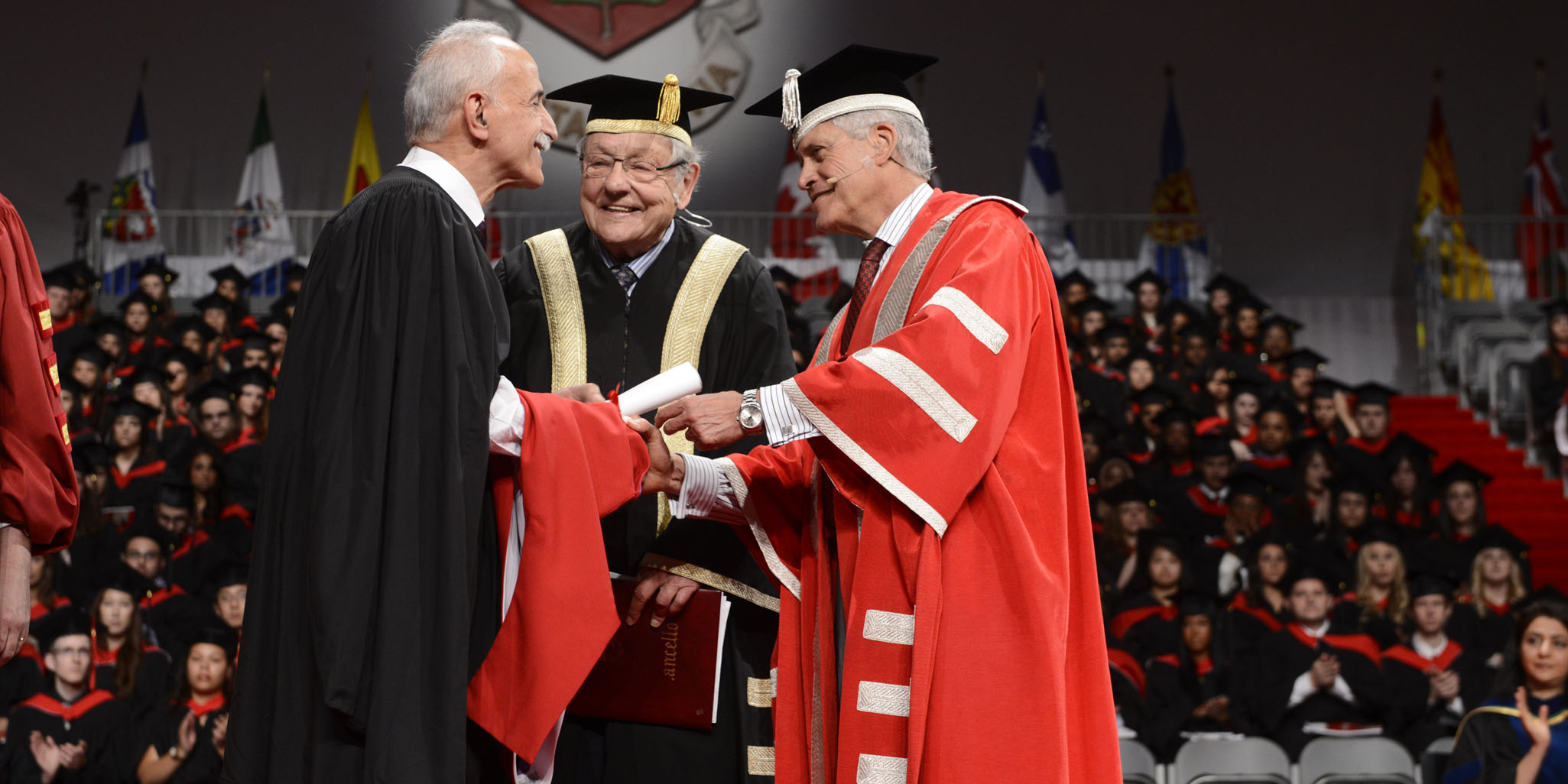 International Federation for Human Rights (FIDH) president Dr. Abdol-Karim Lahidji sat down with PEN Canada on June 14 after receiving an honorary doctorate from York University on behalf of fellow Iranian lawyer Nasrin Sotoudeh. Ms. Sotoudeh, an Honorary Member of PEN Canada, is currently serving a six-year prison sentence in Evin Prison for “propaganda against the regime” and “acting against national security.”  Mr. Lahidji talked about the significance of the honour bestowed upon Ms. Sotoudeh, her resilience, and the state of human rights in Iran.

PEN: What exactly does an honorary award from a Canadian university mean in the larger context of human rights work in Iran?

Lahidji: Whatever they may say, the Iranian authorities are extremely sensitive to a gesture like this. The honorary degree is both a recognition of Nasrin’s work and a show of solidarity. They are very aware of this. The Iranian people are too, because the country has been going through a very difficult period for the last few years, politically and economically, in which the government has behaved in a very totalitarian manner. Unfortunately this has left the Iranian people feeling isolated from the rest of the world. Political prisoners also feel this way. It is very helpful to them when they realize that they have not been forgotten and it also puts pressure on the Iranian government.

The European Parliament also gave her a prize, the Sakharov Prize for Freedom of Thought 2012, which was jointly awarded to the Iranian film director Jafar Panahi. She has also received other recognition and prizes, for example the 2011 PEN American Center/Barbara Goldsmith Freedom to Write Award in New York, other prizes in Italy, and the honorary doctorate degree from York University in Toronto. Other Iranian human rights defenders have also received prizes, e.g. Abdolfattah Soltani in Nuremberg.

These gestures send a powerful message to the Iranian authorities and to the prisoners themselves: no matter how much you mistreat these people they are still seen as heroes by the international community

It’s important to the work of people like us and [Nobel Peace Laureate] Shirin Ebadi that this sort of recognition takes place, especially for people who have been treated intolerably by the Iranian state; people who have been labeled counter-revolutionaries, spies, and enemies of the state. Even within the prison system they have been insulted. Prison officials have, for example, occasionally mixed female political prisoners with prostitutes and drug addicts. It is an attempt to humiliate them.

Gestures like the awarding of the honorary degree at York University are a valuable retort to such diabolical politics. They send a powerful message to the Iranian authorities and to the prisoners themselves: no matter how much you mistreat these people they are still seen as heroes by the international community. Not just Nasrin, of course, but other prisoners of conscience too, like Abdolfattah Soltani, Mohammad Seifzadeh and Shiva Nazarahari (Nazar Ahari), a human rights and women’s rights activist. It matters because the message gets through. When I was sitting down to eat lunch after the ceremony at York, my wife called from Paris to say that someone in Tehran had just called her to say they had heard the news about me accepting the honorary degree!

It’s good for her children too, a thirteen-year-old girl and a boy of seven. It’s a relief for them, a recognition, and an encouragement.

PEN: Our understanding is that when she held the 49-day hunger strike other female prisoners joined in and it quickly became a matter of national concern. Wasn’t there a petition within Iran pleading with them to stop? From outside it does seem that despite the humiliations you mention, Ms. Sotoudeh has wrested power away from the authorities very effectively. After all, they climbed down. It appears as though her character is strong enough to make these statements regardless of any prizes.

Lahidji: Yes, she has a lot of character. That’s why during her hunger strike I was worried. During that period I wasn’t able to sleep properly. I told my wife “She’s going to die!” Nobody knew how she was, nobody even got to see her. We took part in round table discussions about it on international radio stations (RFI, BBC and others) but nobody knew what would happen. When I was still a practising lawyer in Iran, she was in her teens and later a distinguished student. Yes, she has a tremendous character – that’s why I feared for her life because I knew she wasn’t going to give in. That’s why it was such a challenge, not just for the wardens of Evin prison, but for all the authorities. I was able to get messages through to her and I warned her that it was a dangerous situation and she should be careful … that she shouldn’t die. That’s because I know that she will play a very important role in the future of Iran.

I was able to get messages through to her and I warned her that it was a dangerous situation and she should be careful … that she shouldn’t die. That’s because I know that she will play a very important role in the future of Iran

PEN: We feel the same way. In your own career, Mr. Lahidji, you have witnessed lapses on both sides of the political divide. You catalogued the widespread human rights abuses of the Pahlavi regime and you have also seen the excesses of the Islamic Revolution. As an outsider who can only read about the situation within Iran, it is striking how confident so many Iranians seem to be that the constitution and the existing laws are sufficient to bring the country back in line with international human rights standards. Is that impression correct, or is something else needed to rectify the situation?

Lahidji: When you are a lawyer working in an authoritarian country you try, first and foremost, to convey the message that the state authorities should respect the rule of law – because the country is ruled by this law. Even though this law isn’t the best in the world, even though it may not conform to international human rights standards, lawyers must respect the law. Good law or bad law, there is a law that should be respected, by the judiciary, policemen, government etc. Above all we have to convey this message to the authorities.

I’ll give you an example. After the 1979 Revolution the first version of the Iranian constitution was drafted by four distinguished Iranian jurists. I was among the four. It included articles which said that every accused person – every single one – has the right to the assistance of a lawyer within the first 24 hours of their arraignment. That draft was later substituted with an anti-democratic version and this provision was never respected in Iran! When Nasrin and other lawyers ask that defendants must have access to defence counsel at all stages of investigation – and these are working lawyers, not intellectuals making facile criticisms – they are simply demanding respect for the law. That is what we mean when we ask for the law to be respected.

At the same time, it’s fair to say that Iranian law is discriminatory, against women, children, non-Muslims – so she has also fought to bring Iranian law into line with international law in these respects. Some Iranian lawyers and jurists say that international human rights and democracy are compatible with Islam. I think that this is an illusion. Human rights don’t conform with Islam, nor with Christianity, nor with any other religion. Human rights change every day whereas religions change only rarely, if at all. That’s the problem.

PEN: Former Canadian Minister of Justice Irwin Cotler recently wrote about the importance of foreign politicians taking up the cause of Iranian prisoners of conscience like Ms. Sotoudeh. Has such advocacy been effective in the past?

Lahidji: After the photojournalist Zahra Kazemi was killed in 2003 after being arrested for taking photographs close to Evin Prison, I came to Montréal, Ottawa, Toronto to urge the Canadian government to use Canadian courts to at least put some pressure on the Iranian government. They didn’t even respond. “No, it’s not the right time,” they kept saying, “for the moment we are going to continue our discussions with the Iranians etc.” And why? Because the Canadian government had a lot of economic interests at that time, so they drew up a balance sheet. On one side there was the life of this person, half-Canadian, half-Iranian, and on the other, their commercial benefits. .… Sadly we live in a world in which the first pre-occupation of all governments — democratic, non-democratic, liberal, communist, Islamist etc. — is business.

The real difference between Iran and Canada comes down to one thing. In a country like Canada groups like yours are free to launch investigations, make inquiries and even from time to time release statements in which you criticize the government’s politics. You can do this in Toronto, Ottawa, Washington etc. You simply cannot do this in Iran. That is the crucial difference. At the International Federation for Human Rights, known by its French acronym FIDH — which isn’t centralized like Amnesty International — we are working hard to get to the stage at which all of our 178 member organisations are free to function in the same way.