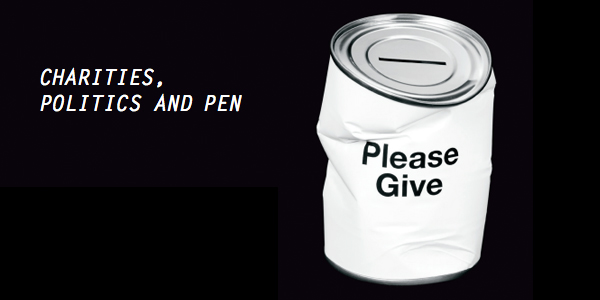 In the following extract from PEN Canada’s 2013 annual report, chartered accountant Hank Bulmash considers the grounds on which the Canada Revenue Agency has carried out recent audits of local charities.

It’s a common perception that Prime Minister Harper has used the Canada Revenue Agency (CRA) to wage a war against charities – at least those with leftist leanings. One well-known example: the David Suzuki Foundation has suffered through several audits presumably because of Suzuki’s personal opposition to nuclear power. Suzuki, who certainly sees himself as a target, has announced that he feels hounded by the government.

The Harper government has budgeted $8 million to review and presumably restrict the political activities of charities. This move is allegedly a response to the activities of environmental groups, some of whom have been funded by American organizations. But it’s also directed at Canadian charities that have entered the political arena. On the one hand, that seems reasonable, since it was never Parliament’s goal to create a privileged class of lobbyists connected to charities. On the other hand, many people feel that restricting the political activities of charities is absurd given that virtually all charitable activity can be characterized as an attempt to change the way social resources are spent.

Many people feel that restricting the political activities of charities is absurd given that virtually all charitable activity can be characterized as an attempt to change the way social resources are spent.

Perhaps in acknowledgement of this tension, CRA rules do allow charities a significant involvement in politics. CRA’s stated position is that at least 90% of a charity’s resources must be used for charitable purposes rather than for political activity. This leaves 10% available for politics. But this 90/10 rule is misleading. Many activities that might be considered political in nature are accepted by CRA as charitable. And some political activities are totally prohibited. A charity can’t spend one cent on them without risking deregistration – 10% rule or not.

Communications that endorse or attack a specific candidate or party are forbidden. As soon as a charity does that, it contravenes the law allowing it to issue tax receipts. This has been seen as a limitation on the freedom of speech, but that’s not fair. Members of a charity can create a sister organization to promote its social goals through political means. The sister organization can support its preferred candidates and oppose others, but it can’t issue charitable receipts or receive funds from organizations that do.

What’s permitted under the 10% rule? Certain types of campaigns aimed at pressuring a government to change a law, a policy or a decision. The rules allow a charity to create advertising campaigns and to convene conferences, panel discussions and demonstrations to this end. But the rules do not allow a charity to engage in the specific endorsements of candidates or parties.

There are many political activities a charity can pursue to which the 10% limit does not apply – they basically concern the distribution of information that the charity has gathered in support of its objectives. CRA states that these activities must be connected and subordinate to the charity’s purpose, they must not contain a call to political action and they must be based on a well-reasoned position.

What does that mean? For PEN, it means the information must relate in some way to freedom of expression (subordinate and connected to PEN’s purpose). The information must not be used as part of a campaign to change the laws or policies of a government (it can’t be part of a political campaign). And finally that subjective term “well-reasoned” simply seems to imply that our information must be rational rather than emotional.

It’s inevitable that any government will have organizations that offend it. Clearly the Harper government is particularly sensitive to attacks on its policies from environmental organizations.

What about the allegations that Harper is misusing the rules for his own purposes? Certainly, government members have publicly attacked environmental groups. In particular Tides Canada seemed to be a target. Tides obtains funds from various sources and distributes them to a number of organizations, not all of which are charities. The recent federal budget introduced rules that limit the ability of charities to make donations to political organizations. Rules of this type are within the spirit of the existing legislation and do not seem malign. It doesn’t make sense to limit the political activities of charities but allow them to donate receipted funds to organizations that are not limited themselves.

Tides is apparently undergoing an audit, but it has not lost its registration, although it was first mentioned nearly three years ago by members of the government.

Physicians for Global Survival (Canada) (PGS) has lost its registration. Despite the atmosphere of dread, this seems to be the only casualty of the $8-million compliance budget. PGS had been under review by CRA for six years before being deregistered. PGS’s stated purpose is opposition to the use of nuclear weapons and war in general – it’s impossible to imagine less controversial motherhood issues. The organization obviously didn’t lose its registration for opposing mass slaughter.

PGS has taken political positions relating to cancer around nuclear power plants in Canada, and it attacked the published health reports of a government regulatory body. It has criticized the Canadian government’s nuclear stance in the United Nations. PGS opposes current Canadian gun control legislation for being too lax. We do know that whatever problems PGS has had with CRA, those issues have been longstanding and predate by several years the Tories’ campaign against the political involvement of charities.

PEN Canada is in a curious position. We achieve our goals by marshalling public opinion and the support of legislators. We may act as a friend to Parliament by providing its members with information. We generally are not opposed to domestic legislation, but we do oppose the actions of governments and other organizations such as police departments that limit access to information. We do not endorse or oppose candidates or political parties. PEN’s actions seem to fall within the CRA definition of charitable activities since they are connected with and subordinate to PEN’s purpose of promoting freedom of expression. Perhaps PEN has little to worry about. It’s pretty to think so.

But we should be wary.

The crucial message of the current government’s campaign has nothing to do with this government alone. It is a reminder that our charitable status is a privilege and not a right. It is a privilege granted by CRA, an arm of the government, and as such we and other charitable organizations will always exist subject to the scrutiny of those in power in Ottawa.

This is not unjust, at least not in principle.

It’s the way the world works.

View all posts by Hank Bulmash →