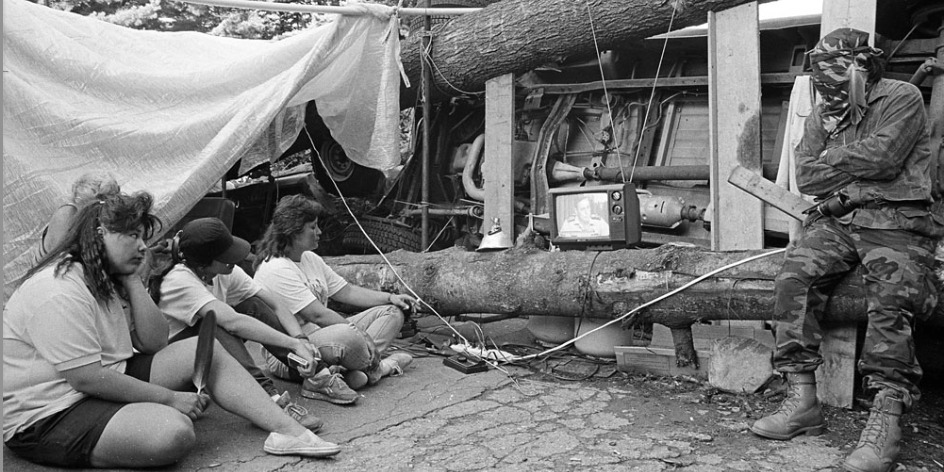 In July 1990, a land dispute broke out between a Mohawk community and the small town of Oka, Quebec after their mayor, Jean Oullette, proposed the expansion of a private, members-only golf club. The Mohawks from the neighbouring Kanesatake reserve argued that this extension would encroach on their burial grounds. Tensions mounted when the Mohawk community protested, creating road blockades. Then president of PEN Canada, John Ralston Saul, addressed the crisis in PEN’s September 1990 newsletter.

This summer has been one of the darkest and most difficult in the history of Canada. The unilingual movement in northern Ontario followed by the failure of Meech Lake followed by the crisis which technically began on a golf course at Oka all combined to set anglophones against francophones and then whites against natives. A nation which commonly soothes itself with a mythological talent for compromise found itself locked into racial and armed confrontations.

An organization such as PEN feels automatically that it has a role to play in preventing and easing such confrontations for the simple reason that the writer and the language he or she creates should serve to raise all of us above the brutal failure which racism and violence represent.

Those are easy words which are difficult to apply once civilized behaviour breaks down and the logic of extremes takes over.

What we must not lose sight of is the context in which the Oka crisis belongs. It is a four act tragedy which began with a half-hearted and failed federal-provincial conference on aboriginal rights. This was followed by a petty second act during which, in the 1990-91 budget, federal funding for native publications was slashed. As you know, up until now we have been concentrating on this issue. Included in this newsletter is an abstract of a legal argument by Christopher Aide in favour of the restoration of the funding. We hope to go public with the full document late this month. It is impossible to give credibility to the arguments of public authorities against extreme actions so long as they go out of their way to undermine the publications which act as the voice of responsible leadership. The third act was, of course, Meech. And then Oka brought us at last to the tragic phase.

During this crisis, PEN has concentrated on the issue of press freedom. The sight of armed men, barbed wire, tanks and armoured personnel carriers created the impression of a war zone. Whatever the reality of this, the fact is that Parliament was not recalled, the Emergency Measures Act (formerly the War Measures Act) was not invoked, and therefore the freedom of the press to report and to move in order to report remained legally intact. When the government announced a blocking food and equipment to journalists inside the barricades, we immediately faxed Prime Minister Mulroney and Premier Bourassa as follows:

The Canadian Centre of International PEN calls on you now to order the immediate lifting of all limitations imposed on media and to ensure that media have unrestricted access to the equipment and materials needed to report on the situation in Oka. Free access to information a fully informed public are central to a non-violent resolution of the present crisis.

I also telephoned government officials in most relevant departments to warn them that they were transgressing established freedoms. Finally we protested against the moving back of journalists outside the barricades. One of the characteristics of war is rumour and propaganda. The presence of the press is not only the presence of fact and of the public eye, it is a constant moderating force, perhaps not on language, but certainly on provocation and on actual violence. Authorities always consider that they can do their job better with no one watching, and they point to the way in which dissidents play up to the cameras as an argument against press presence. But that is a minor argument when set up against not only the public’s need to know, but, above all, the public’s right to know.

But press freedom is not only a right in a democratic society. It is also an obligation, and the public has a right to expect the continued presence of its eyes and ears.

One of the most discouraging aspects of the crisis was that the press themselves gradually ceased to distinguish between their rightful peacetime freedoms, on the one hand, and limitations which are imposed by a state of war, on the other. Again, the Emergency Measures Act was not invoked: their freedoms were therefore intact. And yet they accepted without protest the army demand that they move back more than 300 metres from the barricades. And most newspaper and television networks gradually gave in to the official pressure that reporters and cameras be withdrawn from inside the barricades. This pressure was ostensibly based on the authorities’ inability to guarantee the safety of journalists within the barricades. Indeed, safety was the reason cited by the CBC, for example, when they withdrew their cameras. But press freedom is not only a right in a democratic society. It is also an obligation, and the public has a right to expect the continued presence of its eyes and ears.

Related Reading: “Bill C-51 is a Threat to Reconciliation” by Paul Seesequasis