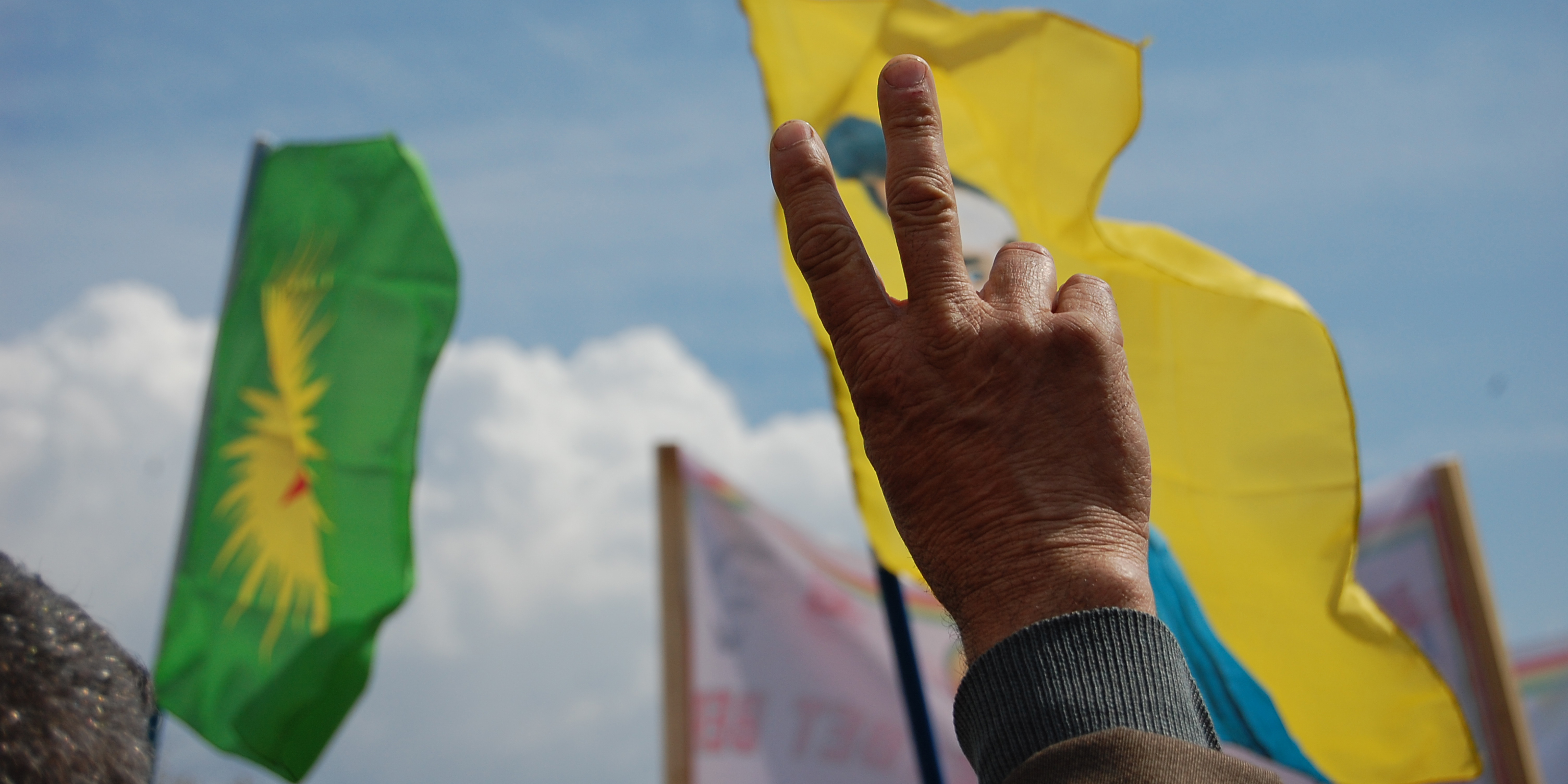 In 1995 the author Yasar Kemal was placed on trial by the Turkish government for publishing an article that condemned its mistreatment of the country’s Kurdish minority and indicated his support for the Kurdish Worker’s Party (PKK). Kemal received a 20-month prison sentence that was later suspended. Nearly 20 years later the Committee to Protect Journalists named Turkey the world’s worst jailer of journalists. The CPJ estimates that a majority of the 49 journalists imprisoned as of December 1, 2012 were charged with supporting terrorism simply because of their decision to report on the activities of the PKK. On March 21, 2013 Abdullah Öcalan, the imprisoned leader of the outlawed PKK, called for a ceasefire in the Kurds’ 30-year struggle for self-rule within Turkey and added: “We have reached the point where weapons should be silent and ideas and politics should speak.”

“You are not convicting me; I am convicting you! I’m convicting your state!” screams the 72-year-old author to the panel of judges who have just sentenced him to 20 months in prison for writing ideas the state doesn’t like.

Holding up his right hand in a clenched fist, his fury at the injustice radiates through his thick glasses and through the cracked open door out to the corridor where a select audience is waiting during the closed session.

Turkey’s best-known writers, journalists, artists, foreign reporters and embassy officials are among the crowd eager to know the court’s decision. Although nobody can hear what the judges say in their hushed, fearful and cautious voices, the solid voice of Yasar Kemal fills the void and informs everyone what has happened.

But nobody attending the March 7 trial can believe that Turkey’s best-known novelist, a perennial candidate for the Nobel Prize for Literature, has just been convicted of “inciting hatred” in an article where he criticized the Turkish government’s handling of its Kurdish problem.

I am fearful of this piece reaching the hands of Turkish officials. As a foreign Summer 1996 correspondent based in Ankara, I am not immune from numerous draconian laws with vague definitions which can be stretched to cover any criticism

Kemal’s fury doesn’t end: “There is no democracy in this country, no rule of law!” he vents at the judges, who sit and listen to him with blank expressions.

“Even Hitler did not impose a food embargo on countries he invaded, didn’t burn down forests. But look at what the Turkish government has done: left the whole of eastern Turkey to starve so it could cut off the Kurdish guerrillas’ lifeline.”

Turkey is under constant criticism for its gross violations of human rights, especially related to the Kurdish conflict. In many areas of southeastern Turkey where the majority of the 12 million or so Kurds live, food stuffs can only be bought with written permission from military authorities stating the exact amounts allowed. The reason? The guerrillas come down from the mountains to demand food from the villagers, who cannot refuse under the shadow of guns.

Hundreds of acres of forests have been burnt down by the military to eliminate areas where the rebels, fighting for autonomy since 1984, can hide. Some 2,500 villages have been evacuated and more than 2 million Kurds forced to migrate to western cities where they suffer poverty, homelessness and joblessness. More than 21,000 Kurds and Turks have died in the conflict.

Everybody here knows all this, and government officials have accepted the above figures. But writing these in a critical manner is still considered a crime. I am fearful of this piece reaching the hands of Turkish officials. As a foreign Summer 1996 correspondent based in Ankara, I am not immune from numerous draconian laws with vague definitions which can be stretched to cover any criticism.

These laws are used systematically against writers and journalists. More than 100 are in prison serving sentences for things they have written.

Luckily, Kemal will not have to serve time in jail because the panel he screamed at suspended his sentence on the condition that he doesn’t repeat the crime within the next five years.

For Kemal, this is not “luck” whatsoever. It is actually a worse punishment than a direct prison sentence.

What I fear most in life is prison – I’m a coward anyway – but this suspension means I have to censor everything I write in the next five years so I don’t repeat their so-called crime. For a writer, this is the biggest torture

In an interview two weeks after the trial at his modest Istanbul home, the grand man of Turkish literature explains: “What I fear most in life is prison – I’m a coward anyway – but this suspension means I have to censor everything I write in the next five years so I don’t repeat their so-called crime. For a writer, this is the biggest torture … At least if I’m jailed now, I can find some calm and write my books without fear, without the Damocles’ sword hanging over my head.”

Kemal asked the judges not to suspend the sentence, but they didn’t hear him. So Kemal has appealed the conviction, asking the high court to overturn the suspension.

Why has he entered the debate on the Kurdish problem? Why didn’t he stick to writing fiction and ignore the issue as many writers do, are forced to do? Before answering these questions, Kemal lights a cigarette, takes a deep puff and ponders for some time.

“Yasar, I wish you wouldn’t smoke so much,” interjects his wife, Tilda. “He never smoked until only seven years ago. He says he needs it to cope with all the problems of this country that worry him.”

The well-built author, whose presence coupled with his deep bass voice must have scared the judges in court, doesn’t dispute his wife’s comment. As he looks at me straight in the face, I can’t help but focus on his right eye, blinded by a bizarre accident at the age of four. Kemal was watching his uncle de-skin a sheep out in their garden when the sharp knife slipped out of his uncle’s hand hitting Kemal in the eye. I try to avert my gaze but keep coming back to the eye – for even though it doesn’t see, it is still capable of reflecting the meaning inside the author’s head.

“I couldn’t sleep at nights for a year, disturbed by pangs of conscience. ‘You are a writer. You have to speak up,’ I kept thinking to myself. So I decided to break my silence.”

Kemal wrote several pieces critical of the government’s attitude toward the Kurdish issue in the last few years, and has been tried on several occasions but was acquitted of all charges until this one.

I don’t want Turkey to be divided,” says the revered author. “A recent survey showed 80 percent of Kurds also don’t want a separate state. All I want, all that the Kurds want, is their universal human rights – the right to preserve their language, culture, identity

Kemal, who is of Kurdish origin, says without hesitation: “I’m a Turkish writer.” He has never promoted his Kurdish identity, and cannot stand Kurdish nationalism any more than Turkish nationalism. But, he says, the basic rights Kurds lack and the brutal war fought against them forces him to speak up.

Speaking and publishing in Kurdish were banned until recently. Education and broadcasting are still not allowed.

“I don’t want Turkey to be divided,” says the revered author. “A recent survey showed 80 percent of Kurds also don’t want a separate state. All I want, all that the Kurds want, is their universal human rights – the right to preserve their language, culture, identity.”

Some of the material in this article is based on Yalman Onaran’s reporting for the Associated Press in Turkey. Onaran is a friend of Yasar Kemal and considers him a mentor and father. Kemal’s book, Mehmet My Hawk, is published by HarperCollins in the U.K. [ed.]