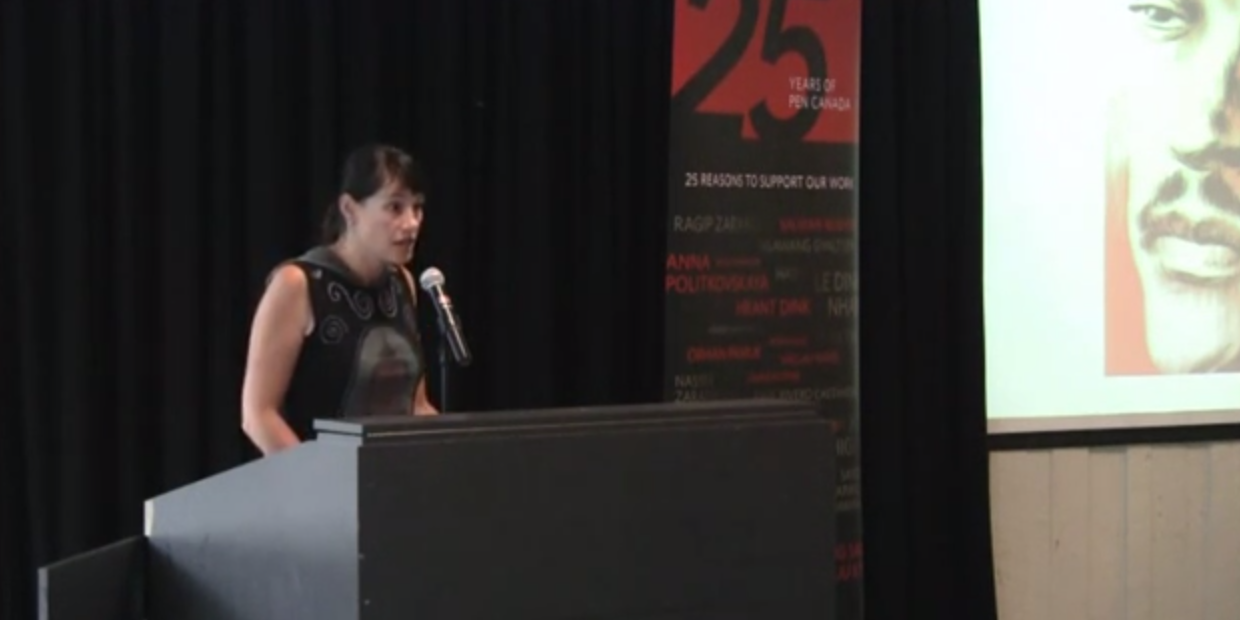 The Other Side of Silence: “You are not forgotten, Dawit Isaac”

On September 23, 2011, the tenth anniversary of the arrest of PEN Canada Honorary Member Dawit Isaac, we invited five Canadian authors to write letters to five Eritrean journalists who had been arrested and detained, without charge or trial, for a decade. Marian Botsford-Fraser (reading for Susan Swan), Karen Connelly, Camilla Gibb, Sheila Heti, and Rosemary Sullivan, read their letters at an event entitled The Other Side of Silence: Speaking out for Eritrea’s Imprisoned Journalists, at Ryerson University.

Dawit Isaac is a playwright, writer, journalist and co-owner of Setit, Eritrea’s first independant newspaper. He has been held in an Eritrean prison without trial since 2001. He is an honorary PEN Canada member. This is Camilla Gibb’s letter to him:

I wonder if sometimes, you feel that imagination is all you have left. And if you do, Dawit, if you even have the strength to let yourself dream for a moment, imagine there is a world beyond where you are not forgotten. You have a brother who canvasses for you tirelessly, friends and colleagues, a wife and children, a Swedish government very aware of your case, several human rights groups advocating on your behalf, you have the concern of writers like me, one of a community of writers who do not know you personally but feel passionately enraged, ferocious at times, at the injustice of silencing, the tyranny of censorship, the cruelty of suppression, the determination to erase.

We all share this fight, this need to defend what is fundamental and human – the right to speak our truths, to be heard, to write, to read, to exist. The silencing of one writer is the silencing of us all, and it is in that spirit, that I write to you. When fear and cowardice and the perversion of power attempt to prevent us from doing so, it becomes all the more important that we join our voices.

I have not shared your experience. But when I think of you, my imagination does what a writer’s imagination does. I think about a prisoner of conscience, a man who existed in confinement so solitary that he began to forget himself. For fifteen minutes a day, he and his fellow inmates were afforded the privilege of stepping out of their excrement and crawling on all fours over a field of broken glass. This was recreation – the torture, as you might imagine, was far worse.

We do imagine Dawit, because no one can place limits on our imaginations. Not even yours.

You can dream of a world beyond, and in your mind, you have the freedom to write anything you want, without fear of reprisal. So write my friend, speak your truths, even if in silence, because we are listening here, attuned, even those of us who seem so remote to you, so far away and unknown to you. Your plight is not unknown to us. You do not disappear despite all attempts to keep from view. You are not forgotten, Dawit Isaac.

She will host The Unknown Famine March 3, 2014 at the Bloor Street Cinema as part of the PEN Picks series presented in partnership with Hot Docs.